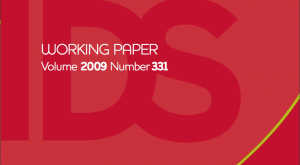 Recent research Bangladesh has come to embody an interesting paradox. On the one hand, it has experienced rising rates of growth, a slow but steady decline in poverty and impressive progress in terms of social development, outperforming some of its richer neighbours on a number of Millennium Development Goals. On the other hand, it has an abysmal record on governance and was ranked as the world’s most corrupt country for five consecutive years by Transparency International. There is an emerging view that the country’s extremely active development NGO sector has contributed to some of the more positive achievements. The question that this paper sets out to address is why these organisations have not made an equivalent contribution on the governance front. The paper argues that while Bangladesh is reported to have more NGOs per capita than other developing countries, those organisations have gradually abandoned social mobilising and collective action strategies for a narrower focus on service delivery and microcredit provision. Our research with the members of six organisations that straddle the continuum between microfinance and social mobilisation suggests that the specific developmental strategies of these membership-based groups do indeed have consequences for both development and democracy in the country.