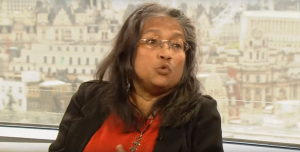 m currently Professor of Gender and Development at the Gender Institute, London School of Economics and Political Science.I have been here since 2013 which is very nice because this is where I started out as an undergraduate and where I did my PhD back in the early 1980s.  Prior to this, I was Professor of Development Studies at the School of Oriental and African Studies (SOAS) at London University. Before that I was Professorial Fellow at the Institute of Development Studies, Sussex which is where I started work after completing my Ph.D and to which I am still associated as an Emeritus Fellow.  I have done short stints in other institutions as well. I was part time Senior Research Fellow at the Department for International Development, UK between 2009-2010, the Kerstin Hesselgren Professor at the University of Goteberg, Sweden in 2004-2005 and Senior Sabaticant for the International Development Research Centre in Canada,  based in its Regional Office in South Asia in Delhi between 2005-2006, a city where I have many friends and colleagues.

I am interested in various aspects of inequality and how they play out within households, labour markets and the wider economy. I am also interested in forms of collective action by poor and marginalized groups that seek a more just distribution of power, resources and political voice and in what this tells us about the relationship between individual empowerment and societal justice. Gender is obviously an important example of these inequalities but I am also interested in how gender intersects with other socio-economic inequalities.  My publications include Reversed realities: gender hierarchies in development thought (Verso, 1994) The power to choose: Bangladeshi women and labour supply decision-making in London and Dhaka (Verso, 2000 and Kali for Women 2001)  Gender and social protection in the informal economy (Commonwealth Secretriat/Routledge, 2008), Can the MDGs provide a pathway to social justice? The challenge of intersecting inequalities (IDS/MDG Achievement Fund, 2010) and more recently Organizing women workers in the informal economy: beyond the weapons of weak (Zed Press, 2013).

I have always sought to link my research with the ‘real’ world of policy and practice which I have done through various training efforts, first the Women, Men and Development short course I directed at IDS, Sussex for several years and then later more regional training and advisory work with governments (eg. India, Bangladesh and the Gambia), various international and bilateral organizations, such as the World Bank, UNDP, UNIFEM, NORAD, SIDA, Oxfam and with national NGOs such as BRAC (which had gone international) PRADAN and Nijera Kori. I am on the board of the Women’s Rights Program of the Open Society Foundations, of the International Centre for Research on Women and on the advisory committee of the ILO’s Better Works Program.In turn, I try to bring this practical engagement into my teaching and interactions within the academy. Finally, I am on the editorial committees of a number of terrific  journals including Feminist Economics, Development and Change, Gender and Development, Third World Quarterly and the Canadian Journal of Development Studies.