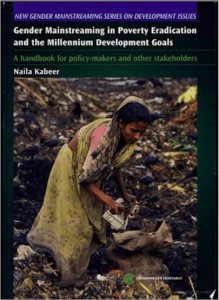 In this book, Naila Kabeer brings together a set of arguments, findings and lesons from the development literature which help to explain why gender equality merits specific attention from policy-makers, practitioners, researchers and other stakeholders committed to the pursuit of pro-poor and human-centred ddevelopment. […] All over the world, women from poor households play a more critical role in the income-earning and expenditure-saving activities of their households than women from better-off households, and are concentrated in the informal economy. The relationship between household poverty and women’s paid activity has, if anything, become stronger over the past decades, partly in response to economic crisis and the “push” into the labour market and partly in response to new opportunities generated by globalisation. Improving women’s access to economic opportunities, and enhancing returns to their efforts, will be to the goal of poverty eradication and the achievement of the Millenium Development Goals

Commonwealth Secretariat (London), IDRC and CIDA(Ottawa) (Translated in Spanish, French and currently being translated into Chinese)