The Power to Choose: Bangladeshi women and labour market decisions in London and Dhaka (2001) 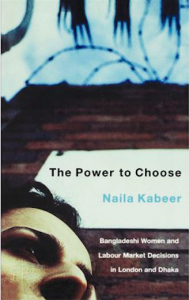 In this path-breaking study, social economist Naila Kabeer examines the lives of Bangladeshi garment workers in Bangladesh and Britain.

The genesis of Brick Lane came from Ali’s observations of family and friends and of the conflicts between the first and second generations of immigrant families, as well as from her father’s storytelling about life in his village, from which several incidents in the book are directly drawn.  She was also inspired by a Verso book, Naila Kabeer’s The Power to Choose, a non-fiction account of women garment workers in the East End of London and in Dhaka. “A lot of the book is made up of case studies, and they read like little Rohinton Mistry novels,” she says. “The stories were from women in very disparate sets of circumstances, but the one thing that drew them all together was their determination towards self-empowerment.”