Organizing Women Workers in the Informal Economy: Beyond the weapons of the weak 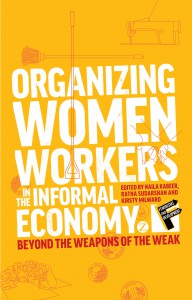 omen Workers in the Informal Economy: Beyond the Weapons of the Weak

Women as a group have often been divided by a number of intersecting inequalities: class, race, ethnicity, caste. As individuals – often isolated in reproductive or other home-based work – their weapons of resistance have tended to be restricted to the traditional weapons of the weak: hidden subversions and individualised struggles. Organizing Women Workers in the Informal Economy explores the emergence of an alternative repertoire among women working in the growing informal sectors of the global South: the weapons of organization and mobilization. This crucial book offers vibrant accounts of how women working as farm workers, sex workers, domestic workers, waste pickers, fisheries workers and migrant factory workers have organized for collective action. What gives these precarious workers the impetus and courage to take up these steps? What resources do they draw on in order to transcend their structurally disadvantaged position within the economy? And what continues to hamper their efforts to gain social recognition for themselves as women, as workers and as citizens? With first-hand accounts from authors closely involved in emerging organizations, this collection documents how women workers have come together to carve out new identities for themselves, define what matters to them, and develop collective strategies of resistance and struggle.

‘This book gets to the heart of the development challenge: by focusing on women workers, the informal economy, and organizing. With an insightful overview by the editors, illustrative case studies from several countries and an inspiring endnote by Ela Bhatt, founder of the Self-Employed Women’s Association, the largest organization of women workers in the informal economy, this book is a must for anyone interested in the power of organization and the intersection of employment, poverty, and gender.’ – Marty Chen, International Coordinator, Women in Informal Employment: Globalizing and Organizing (WIEGO), Lecturer in Public Policy, Harvard Kennedy School

‘While many talk about women’s empowerment, this book offers concrete and inspiring examples of how it is done! The lessons and insights from these cases are relevant to all of those concerned with how to build “people power” from the bottom-up in a global world.’ – John Gaventa, Director of the Coady International Institute, STFX University and Professor, Institute of Development Studies, University of Sussex

‘Women are exerting themselves across the world in wonderful ways. This is about more than combating vulnerability and oppression, although that is important enough. It is also about forging ways of living in which the human condition is enhanced. Women’s organisations are reviving a sense of solidarity and rescuing the meaning of equality, while giving new meaning to the ethos of freedom. This book speaks to that agenda, and should be widely read.’ – Guy Standing, Professor of Development Studies, SOAS and author of The Precariat: The New Dangerous Class

‘While acknowledging the organisational challenges faced and overcome, the essays in this important book mount a concerted challenge to the popular notion that certain kinds of informal workers are too isolated and invisible to be organised successfully. A must read for all looking to understand the organisational strategies which transform powerless labourers into worker citizens.’ – Dzodzi Tsikata, Institute of Statistical, Social and Economic Research, University of Ghana