In India, nearly 10 million women have gone missing since 1985. Sex-selective abortion, infanticide, and the neglect/discrimination of India’s daughters have been recognized by some, such as India’s national newspaper, The Hindu, as a national emergency and “…an epidemic that will have far-reaching social consequences.”

But the picture in neighbouring Bangladesh seems to be rather different. Here, survival chances of girls relative to boys has steadily improved and there is little evidence of sex-selective abortion. The research was funded by Canada’s International Development Research Centre (IDRC).

The findings in Bangladesh provide a new vantage point from which to reexamine India’s ‘daughter deficit.’ In a public lecture at IDRC, Naila Kabeer explored the diverging trends in these countries. The Bangladesh study draws on a survey of 5,000 women in different districts in Bangladesh, including the village where Kabeer explored some of these questions in 1979. 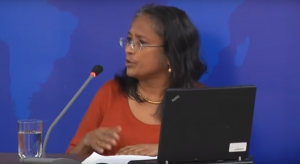