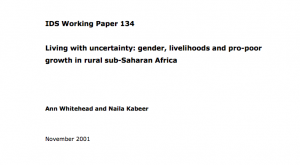 This paper provides a gender perspective on recent arguments about the link between economic growth and poverty reduction in rural sub-Saharan Africa. Recent research from the African context, which adopts a ‘bargaining’ approach in place of the earlier ‘unified’ approach to the study of household economics, has suggested that gender relations within the household are a major factor constraining women’s productivity in African agriculture and leading to various types of allocational inefficiency. The paper suggests that many of these studies overlook the fact that households are arenas of joint, as well as competing, interests, and may overstate the extent to which gender conflict underlies observed low productivity. A livelihoods approach, which takes account of the key objectives which characterise households in poor, agrarian environments, and the multiplicity of ways in which they seek to attain these objectives, provides a richer and more nuanced account of nature of poverty in the region. Using such an approach, the paper discusses the role of households and families in an environment characterised by pervasive uncertainty and notes the various ways in which women are disadvantaged, relative to men, in the pursuit of security of livelihoods. These include both intra-household inequalities, but also inequalities generated by biases in the wider institutional arena. The paper concludes by noting some of the ways in which addressing these gendered constraints might contribute to the long-term effectiveness of pro-poor growth strategies as well as to the goal of greater gender equity.